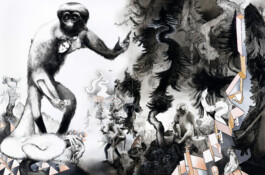 Picture Gallery of the Academy of Fine Arts Vienna

Born in Leipzig in 1969, the painter and graphic artist Susanne Kühn is one of the most important figurative artists in Germany. Before moving to Freiburg im Breisgau in 2002, she spent many years in the USA. Since 2015, Kühn has been a professor of painting at the Akademie der Bildenden Künste Nürnberg. Her most recent work fluctuates between drawing and painting. For the past several years, she has made use of contemporary artistic forms of expression in her works.

For the Correspondences series in Vienna, she painted two new monochromatic diptychs which were inspired by the grisaille (grey in grey) outer wings of Bosch’s altarpiece. In these large paintings, she explores her role as an artist in the context of crucial current events. The exhibition Bosch & Kühn. Susanne Kühn: Beastville unites the terms »beast«, the animal, with
»ville«, the city. On the one hand, the artist is alluding to the animal contained in all of us. In today’s society, this animal threatens to undercut the social ideals of humanity. More and more people are acting out of fear and self-interest – just like animals that fight for survival and, when cornered, develop the omnipotent fantasies of an Übermensch. On the other hand, in western culture a bestial nature has historically been ascribed to women. Women were reduced to their physical and reproductive traits, whereas men were seen to possess true intellect, imagination, and creative power. Kühn uses the animal figures to question these attributes since they also inhabit her space as a woman and an artist. With a great deal of artistic license and a telling sense of humor, she plays with these associations and transforms their relevance. In this way she can create seemingly absurd scenarios, allowing new spaces that follow their own set of rules to appear.
Kühn’s animals thus do not reside in the realm of myth but live among us. We encounter them in
an imaginary, seemingly apocalyptic landscape that the painter has furnished with clearly recognizable markers from human culture both past and present. In the painting Beastville, the computer-generated pyramids and stepped structures are evidence of civilizing interventions. In ROBOTA II we see clones in a psychedelic new world building a robot. »Beastville is a place where apocalyptic architecture exists and proliferates next to the wildness of nature,« says Susanne Kühn. Its inhabitants are a reference to ourselves.